A viking action-fantasy movie from the 50s, with Kirk Douglas? Sounds cheesy and historically incorrect enough! 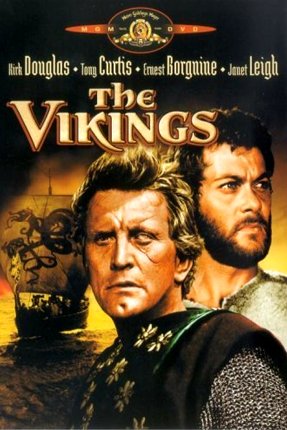 movies about the Vikings tend to dream up certain things that are not historically true, even if the movies do not intend to go all fantasy on us. The image many have of the Vikings comes from these incorrect (but still “realistic” movies), but there is no doubt that the movies are often more enjoyable because of these incorrectnesses.

The Vikings‘ plot is as follows: A princess from one of the many small English kingdoms is abducted during a Viking raid, and is destined to become the wife of Einar (Kirk Douglas), a son of a Viking chief (Ernest Borgnine). However, a slave (Tony Curtis) also falls in love with the princess, a slave whose past is so special that it entangles the relationship with both the princess and the chief’s son. Especially since the slave himself is not aware of his own past. The slave frees the princess from her viking capture and takes her to England, but Einar will have nothing of that and takes his men to England to get the princess back. With brute force the English castle holding the princess is taken over.

The plot is surprisingly intricate for an adventure movie of the 50s, in the sense that you have the superficial action and love story on one hand and the sub plot about the relationship between Einar and Erik the slave on the other hand. This brings a depth to the movie which is slowly unfolded and making it almost three dimensional, because you’ll realize that the action is not only there for its eye candy appeal, but because it means something more.

For its time, the stunts are good, the fights spectacular, and the pseudo-realistic costumes and stage designs makes it all almost believable. I found the music to be not very Viking-ish though, and almost distracting in some places, but one clever thing I noticed was the use of short extracts of familiar music by Grieg at one point; a good way to illustrate the Norwegian-ness of the movie.

I thoroughly enjoyed this movie; swashbuckling rugged heroes fighting over a woman in the exotic Viking era is a concept many will love.