Even though it is one of the most well known legends in medieval and pre-medieval history, the Beowulf poem has not yet been made into a regular blockbuster fantasy movie. Robert Zemeckis’ CGI animated Beowulf comes close, but is a 3D cartoon what makes the story justice? 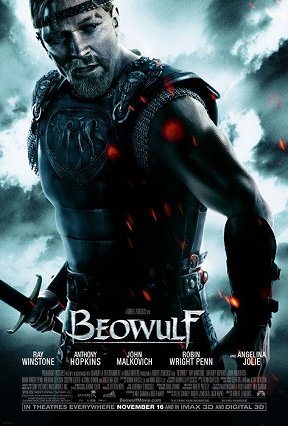 (Back to the Future, Who Framed Roger Rabbit, Contact, Polar Express) has in later years specialized in animated CGI movies, and no doubt did Beowulf lend itself to that technique. When you are in the fantasy realm, animation – whatever technique chosen – works simply because there is no reality to compare it to. We know what cars and modern clothes look like, but we can’t say “a dragon doesn’t look like that” and back it up with evidence from our daily lives. With a script by Neil Gaiman and a strong cast, everything is set for great results in Beowulf.

The story, as it goes in all Beowulf movies, is about the defence of a Danish kingdom in pre-Viking ages from the attack of the monster Grendel. King Hrothgar is about to open his new mead hall when Grendel kills almost all the people there. Beowulf arrives by ship and makes a pact with Hrothgar to kill Grendel, which he succeeds at. But Grendel’s mother, a water demon, wants revenge!

Aside from a classic story, some great actors and a naked Angelina Jolie, what generated interest in this movie was its motion capture animation and 3D visuals. As one of the most hyped 3D movies before Avatar, Beowulf was not just a spectacle but in fact set new standards for CGI animation, as it refined the use of motion capture (mo-cap), a technology which has been around for a while but has not been perfected yet. The objective with mo-cap is to be able to animate movement, facial expressions and character interaction in a more realistic way, and indeed that works out great in this film. Compared to earlier fully CGI animated films, realism is added to a large extent and prevents the movie from being too artificial. Surfaces, sets, props, even characters are still “painted over” by computers so it’s not like we get to see real actors being manipulated by computers. The feeling of seeing a cartoon is still there. Thus you need to be able to appreciate animated films to enjoy this one, which isn’t a given for every viewer. Beowulf – in spite of its realism – still looks and feel more like a digital cartoon than live action, even though its violence is mostly not cartoony (i.e. lots of blod and gore). The biggest pleasure with Beowulf‘s animation is that is proves mo-cap can really work, although there is still work to be done in the field.

Computer images is only a 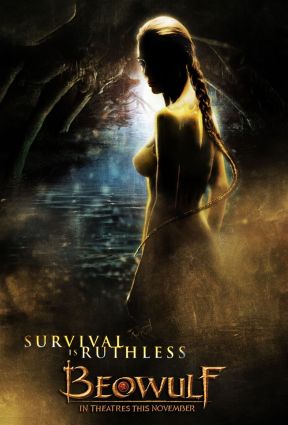 portion of the film, however. The most important aspect is how the story is presented and what characters say and do. In that regard, Beowulf is nothing more than an above average, good enough, big budget fantasy blockbuster. It’s popcorn entertainment that manages to create a few thrilling and spectacular scenes, but there are no major character or story revelations that add to other Beowulf movies or similar monster slayer adventures. Everything is vivid and fun, including the story twist of having Jolie playing the most beautiful monster ever, but there is nothing new in terms of what is brought to the story table. Great movies have excuses for why they exist, but Beowulf‘s main excuse is to use technology to tell an old story again. By old I don’t only mean that the source is old, but that this particular type of hero tale is a cliché and that Zemeckis wanted to make a traditional fantasy story without any other ambitions than creating entertainment from a public domain figure. Additionally, there are very few things that really justifies 3D. The things that are justified are details in how things are shown, such as a speer revolving a few extra times around its own axis or a body being thrown across a room, but 3D has not been used to tell a story or present characters that could not exist in 2D. We’re actually back to the same problem that regular CGI effects in the mid and late 1990s faced; if it could be done, it should be done, even if there is no creative and artistic reason to. I don’t buy that 3D is here only to show special effects in an even more spectacular way than normal 2D.

Nevertheless, Beowulf is solid fun, it’s a rollercoaster ride and is a worthy – though not awesome – addition to the Beowulf legacy. There have been a few movies made on the subject, and this is the one that is going to be remembered for some time.